The Story of Our Family – Baking Four Generations 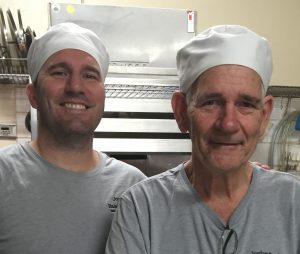 ‘Twas three generations ago that the Jordan baking dynasty first emerged. Thomas James Jordan (Papa) came to Australia in 1891 from England as a free settler. He was a builder, farmer and baker. He built his own mud brick oven on the outskirts of Coffs Harbour and would cart his bread via horse and sulky into town to sell it.

His eldest son, Thomas William Jordan (Poppy), did his apprenticeship under his father in Urunga and went on to own and run a number of bakeries around NSW for 44 years.

His eldest son, Wayne Thomas Jordan, also did his apprenticeship under his father. Three years ago he took over the running of the family business which is currently ‘Jordans Family Bakehouse’. Tom still works part-time in the business (Wayne is glad to have him!) and is enjoying semi-retirement.

As part of the business, Wayne took on the production of a massive amount of Gingerbread at Christmas time and therefore decided to make it into a separate business called ‘Jordans Gingerbread’ with an online shopping component.

Workmanship, trust, efficiency, quality, service, adaptability and generosity are some of the values that have been central to the Jordan Family through the generations. Wayne’s forefathers built their business’ on these values. As a fourth generation baker, Wayne endeavors to strengthen and build on the solid foundations laid before him.

Australian Made and Owned